You are here: Home | journal | Phenomenological Primitives and Learning of Science

Phenomenological Primitives and Learning of Science 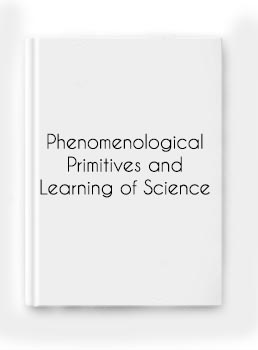 Phenomenological primitives play a vital role in learning science.  Phenomenological primitives are primitive notions which stand without significant explanatory substructure or justification.  Phenomenology makes a distinction between appearance and essence.  Phenomenology is the study of essence.  Phenomenology deals with question of what is the nature or meaning of something.  This is different from naïve conceptions and prior knowledge. Naïve conceptions develop before students experience formal study of science.  Prior knowledge is a combination of both knowledge and skills accumulated from previous experiences.  However, phenomenological primitives may facilitate, interact or obstruct new learning.  The aim of the present study was to shed some light on the phenomenological primitives of 11-year old students, more specifically on the concepts related to light, electricity, mass, weight and solutions.  A 10-item two-tier multiple choice test was developed and administered to 414 sixth grade students of twelve schools.  These schools included government, aided and unaided schools located in rural and urban areas.  A few selected students were interviewed to understand their explanations of the reasoning.  The results indicated that sixth grade students among several other p-prims hold that energy is associated with moving objects only.  Since children’s existing ideas have a major influence on learning, it is necessary that the teacher should be sensitive to his or her pupil’s ideas. If teachers are aware of some possible views held by children at various age levels, then they can device appropriate methods to deal with different views held by their pupils.